About two or three months ago I decided to have a quick look at what sites Google consider related to mine using the related: search operator.

To my horror I saw a list of SEO agencies - some of which were no more than a landing page for a paid SEO service (of no doubt dubious quality). Why would Google think this blog is an SEO company?

SME Pals' tagline is 'Start a small business today', and the focus of the site is to inspire entrepreneurs to find a business idea and startup as quickly and easily as possible. Sure, search is a big part of growing an online business, so I talk about it... but is this enough to cause Google to think this blog is an SEO service?

A few years back SME Pals was doing well in search and attracting a lot of attention - to the point where I began toying with the idea of offering writing, marketing and content oriented SEO services.

I know a bunch of really talented local writers and I thought I could leverage the popularity of the blog to give them a platform to find new clients (and take a cut for facilitating).

My first port of call was to create a Google+ business listing as an online consultancy. I set about creating a few landing pages for consultancy services, but, since I have my own business interests, I could not really give enough time to build the business.

After a few months, I realised that it would be better to restrict the focus of the site to blogging. So I deleted the business listing in Google, removed the consultancy landing pages and, perhaps naively, assumed that was that.

How wrong I was.

When I realized that Google mistakenly believed this blog to be an SEO company I decided to investigate. That's when I noticed that a deleted Google Places for Business listing isn't really deleted.

What's worse is that they don't have an even more delete button to get rid of business information that is completely irrelevant and inaccurate (remember we are talking about a brief listing from years ago).

Was it the fact that Google was stubbornly refusing to let go of my 'computer consultancy' listing that was causing it to wildly misinterpret the focus of this blog?

To be honest, I doubt it. But why else? Google Webmaster Tools reports SEO as my fourth or fifth most common keyword. But it ignores words likes 'website' (which is more common), so SEO is probably only just in the top ten.

First I tried (for quite a long time) to delete the listing even more, but a deleted listing doesn't offer a way to delete it again. And there is no way to even edit the incorrect information without bring the page back to life (which is not what you want if you are trying to delete it).

Eventually I gave up.

There was no way to have this business listing removed from next to my site in the search results. Well actually it did disappear for a week or so but this turned out to be a bug in Google, and it returned once the bug was fixed.

Two can play at that game

So now I am stuck in a situation where Google is all three of the monkeys in 'hear no evil, see no evil, speak no evil' - never mind do no evil. No matter what I do, to them, this site is an SEO consultancy.

Well, I might not be able to delete the business listing, but I am allowed to bring it back to life and then edit it. So that's what I did.

This blog is now the only Fugu restaurant in Cape Town: 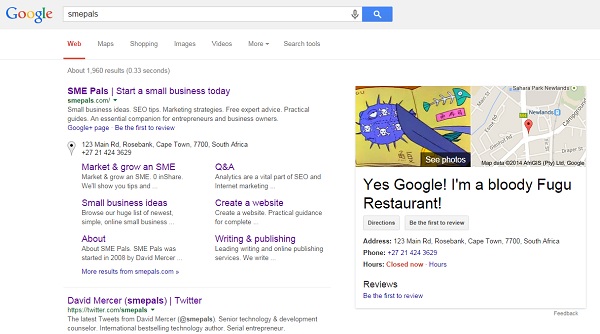 Now normally, I tend to be very particular about doing things by the book. Especially when it comes to business. But in this case, it is completely pointless since Google is going to associate a listing that is completely irrelevant to my blog either way.

I may as well have some fun with it, right?

How will this affect rankings?

It's an interesting question as to what this will do to the site's rankings. The issue is moot anyway since Google dropped traffic to this blog by around 99% over the Hummingbird update (that's just when it happened, I know that Hummingbird itself isn't the same as Panda & Penguin).

One of the focusses of this blog is to provide a bit of inspiration by looking at new business ideas and covering them in a bit more depth than the average article. A good example is Two great startup ideas for entrepreneurs.

So business ideas is something that I used to rank highly for, and should still IMHO.

I took a look at where SME Pals ranked for the phrase business ideas, which I know is pretty competitive. I was just about to glide past page 4 when I noticed a site actually called businessideas.com.

Ok, I thought. This site is actually dedicated to business ideas and it is only on page 4 (still ranked better than SME Pals - which I never actually found a result for), so let's take a look at what they offer to get where they are: 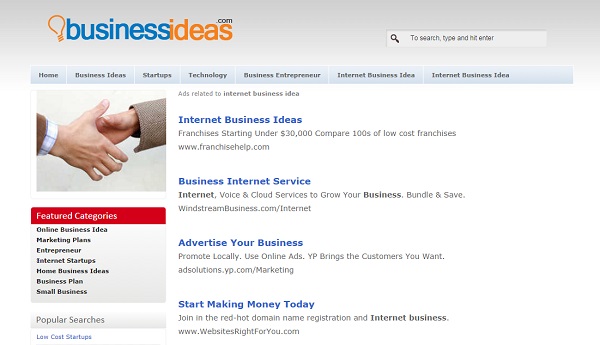 Notice anything unusual? For a start the last two menu items are the same thing - which would give you the first clue about the quality of the content.

Right about now you're thinking 'penalty'. Well, John Mueller himself said there was definitely no penalty. A reader commented that he probably meant manual penalty - if he did, he's not giving me much credit (since all I have to do is check in Webmaster Tools to see if there is a manual penalty notice).

And, while I don't mean to harp on about it, my books have been translated into like 12 different languages and published all over the world. Some of them were recommended readers at places like MIT.

So I'm good enough for MIT, but not for Google - which apparently prefers pages of affiliate links.

So there we have it. Google can't work out what this blog is about. They prefer affiliate links to content anyway. And soon I hope to be the busiest Fugu restaurant owner in Cape Town ;)

Making sure your site enjoys the benefits of high quality, relevant backlinks is about more than creating great content and waiting for nature to take its co

Check out two of the best business SEO tools (Ahrefs vs.

Webmasters, bloggers and anyone else trying to make a living off the Internet, and in particular, Web traffic generated Google search, will understand how en

Restoring Web traffic volumes after a Google algorithmic penalty (especially one like Panda or Penguin) can be a very difficult and, often, fruitles

Google analytics provides a wealth of valuable SEO data. But are you using it to its full potential to help create better content, drive more traffic and convert it more effectively?

It often helps to mine Google analytics data for SEO intelligence with a specific business objective in mind. The analytics and SEO tips covered in this article are all techniques I use to help me decide what new content to create, and whether or not my content is making an impact.

"How good is Drupal for SEO?" The answer: great Drupal SEO is easy to implement with the right strategy, information and modules.

Really unique and clever business ideas don't come along all that often, and when they do I feel obliged to help them out with some free SEO advice.

I came across We Rent Goats today, and loved their eco-friendly idea of clearing weeds and brush with goats, instead of harmful herbicides.

The site opens with a cute sign of a goat carrying a sign around his neck - "will work for food". Nice touch.

SEO: A Complete Guide to Optimizing for Search

When to use robots.txt and 301 redirects for SEO

Use robots.txt and 301 redirects to "shape" your content into a Google search friendly high-traffic machine while avoiding common pitfalls

How to Suck at Google Search

Would you love to get completely irrelevant traffic from Google's organic search results? How about absolutely no traffic at all?